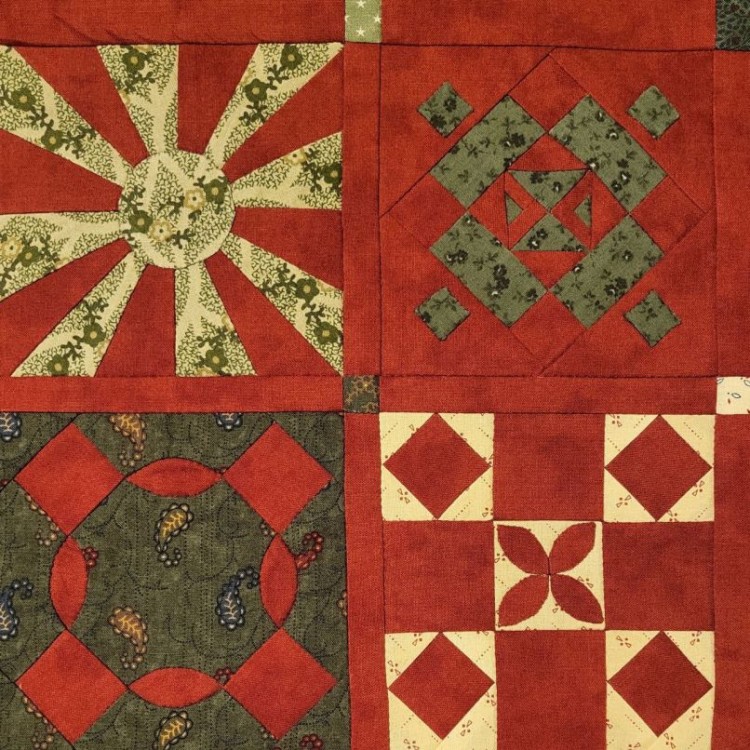 I had big plans to blog once a week until I was caught up, but here it is four days before Christmas, and I’m just now sitting down to knock out this super quick article about the sashing I did in September and October.

Perhaps I’ve been avoiding writing the article because this batch of assembly included the reappearance of the dreaded Block E5 (top left).

My love-hate relationship with this block started with the Victorian camouflage fabric, which I am most definitely not a fan of. It’s still as ugly as ever.

You may recall that E5 was also the block that I initially made too big and then trimmed down, not remembering that this would cut off the knots on all my seams, requiring me to restitch them all later.

Plus I made this block way back in 2017, apparently before I understood the importance of having the edges of the block on the fabric grain. This definitely made it challenging to attach the sashing without stretching anything out too much.

And of course, I didn’t redraw the stitching lines on the edge of the block after all the cutting and restitching, so I had to carefully mark them without letting the marking pencil stretch out those bias edges too much, before I could attach the sashing. This block is the gift that keeps on giving!

By comparison, the other three blocks in this batch of assembly are barely even worth mentioning – generic stocking stuffers at best. Actually, I take that back; I’m pretty darn proud of Block F5 (bottom left), my first attempt at curved piecing by hand.

The best Christmas gift of all, though, is knowing that three sides of the dreaded Block E5 are now stabilized by sashing fabric – only one side left to go. Merry Christmas to me!

2 thoughts on “The Gift That Keeps On Giving”