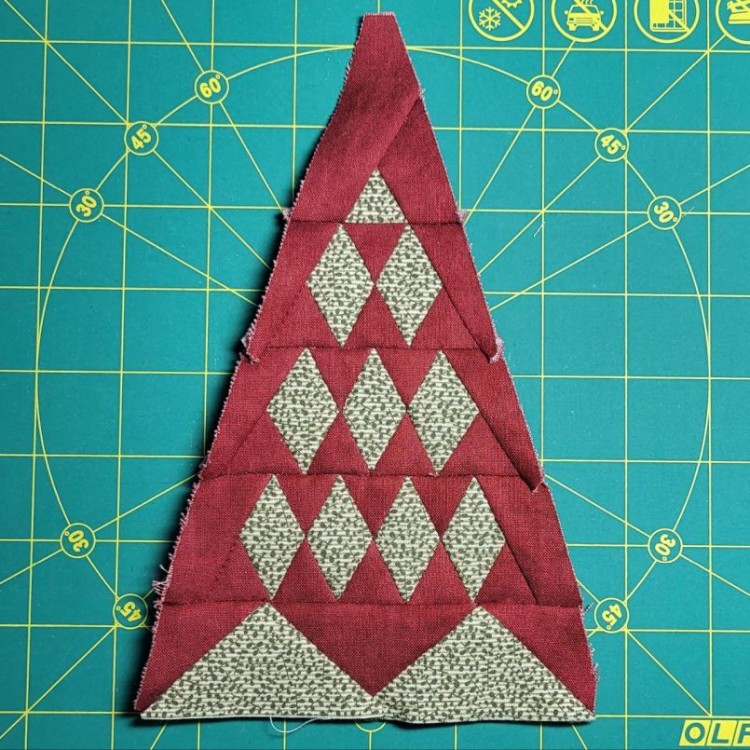 With a virtual mini-retreat earlier this month, I’ve stacked up all kinds of completed blocks to blog about. And yet, here it is the last day of November, and I’m just finally writing about my September progress.

While the construction of this block wasn’t that exciting, there is plenty to brag about here. Specifically, this triangle marks the halfway point on the triangle blocks. Hooray!

The block is sort of fussy cut, in that I tried to have a stripe running from point to point on the diamonds, so it looks like they are all part of the same piece. I used the Avery label technique on this one, as I do on most of the triangle blocks; the semi-transparent labels made it easier to line up the stripes correctly.

Even with the labels keeping everything crisp and precise, it was still a bit of a struggle to keep the block to the right size. Was this one marked as advanced difficulty just because of the sheer number of seams? They definitely provide plenty of opportunities to be off by a fraction of a millimeter.

With all those seams, it’s also so bulky that I don’t know how I will get it to lay flat. Pressing it was an adventure. I’m still not sure where everything should go. At one point I just turned it right side up and smushed everything down with the iron from the front.

My many milestones are not limited to the Dear Jane project either. Another milestone is that in September I stitched what appears to be the last green triangle on the rainbow quilt. It’s pretty exciting to be done with one of the six colors of hand quilting thread on this project.

I did indeed meet my September UFO Challenge goals, although I was working up until the 31st of September to get them done. In addition to the one new Dear Jane block, I sashed and sewed together two other Dear Jane blocks, plus stitched 18 triangles on the rainbow quilt: 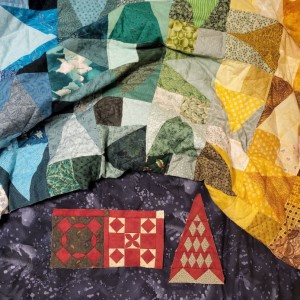 Here at the end of November, I’m tackling the dreaded G6 block, rumored to be the most difficult block in the whole Dear Jane quilt. It’s that one with the tiny eight-pointed star (which is 1″ from point to point) in the center of the block .

I’d been dragging my feet on starting it for weeks (even after deciding it was the next block I would do), but I finally realized that all these milestones I’ve been completing started with a first step, and the G6 milestone should be no different.

So, here are some first steps: I’ve broken ground on the G6 block, and with this article, I’m also breaking ground on this huge backlog of blog articles. Hopefully you’ll hear more from me soon about my many other milestones!