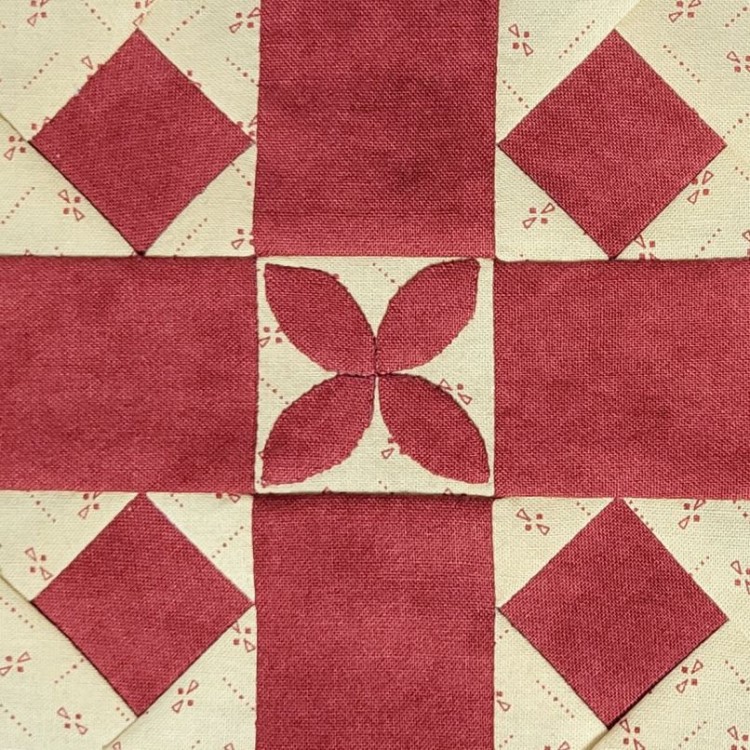 March is historically not a great month for our family, and this one was no exception – a stressful and draining 31 days for sure.

So, I wanted a Dear Jane block that was not too complicated that I could whip out during the month of March, and this block seemed like a great choice. Some little diamond-in-a-square blocks, an overall nine-patch pattern, and an appliquéd “four-leaf clover” in the middle patch (totally appropriate for the month with St. Patrick’s Day).

Sometimes appliqué is good when you’re struggling to get into your quilting. It’s not my favorite technique, but there’s not much to it. You don’t need a ton of focus to make sure you’re putting pieces together in the right positions.

However, you will notice that one of the leaves of my four-leaf clover appears to be making a break for it. Those tiny appliqué leaves were so frustrating that I wasn’t about to do it over again. Instead, I rotated the block in all directions to see which orientation made the rogue leaf the least obvious, and took the photo facing that direction.

I’ve been struggling a bit to keep up the pace on my UFO Challenge goals. In fact, I wasn’t quite finished at the end of the month. My company had been ramping up for weeks for a big software release on March 30th. At the end of that day, I was too tired to do any quilting, but I promised myself I’d wrap up my March quilting goals the following night.

And then just when I was getting ready to quilt after work the next night, we had a plumbing emergency at our home. It was not a great time to find out that your plumber is not an emergency plumber and can’t get there until the following day. I spent a hectic few hours trying to find someone who could come out that night, then trying to keep my mother-in-law from pestering the plumber while he worked.

I did make some progress, sewing together the two Dear Jane blocks while the plumber did his work. But by the time I wrote the large check and he left, I was worn out. The end result is that at the end of the month, I still had 6 triangles to go on the rainbow quilt to meet my March goals.

With all the drama in the last week of the month, I made an executive decision that April 1st was going to count as part of March this year (April Fools!), and got those last few triangles done the next day. I sure was glad when the month was finally over (especially after extending it to be 32 days long).

Here is my mostly-in-March progress on my UFO Challenge goals: 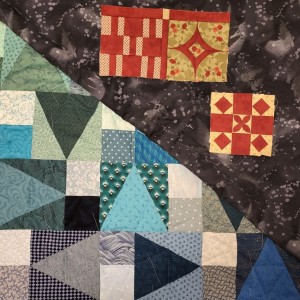 I completed one Dear Jane block, sewed two more of them together, and completed 18 triangles on the rainbow quilt. The two blocks that I stitched together go in the bottom right corner of the quilt- this is why there is no red sashing strip on the right side of that green block. I almost goofed up and put one on, when I really didn’t have enough time or energy to sew extra seams that didn’t need to be sewn!

And now here I am, finally blogging about my March quilting adventures (which somehow included April Fools’ Day) on May 1st. Does that make this May Fools’ Day?