While making this triangle block, I had so many flashbacks to my first triangle (with diagonal stripes), remembering just how easy it is to get off track with these triangle blocks. At least this one is regular vertical stripes, so it feels easier to measure along the way and make sure I’m on track.

This triangle was originally slated for one of my replacement fabrics. Later I found some of Paulette’s designated fabric, but I decided to stick with the new fabric. They both have very subtle tan-on-tan dots, but the scale is a little smaller on the new fabric, so I feel like the design elements might show up a little better using that print. More texture is good.

After cutting out and marking all the pieces, I carefully laid them out in order on my cutting mat. The block is sure a lot wider before it’s pieced together … so much seam allowance for one small block! 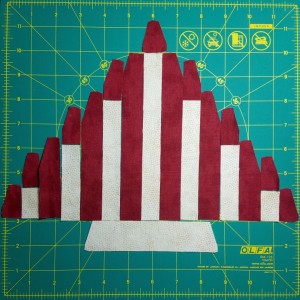 I started with the center seam and worked my way outward. After each batch of seams, I put it under the triangle ruler to make sure I was still on track, and it looks like I was on track with the first three stripes: 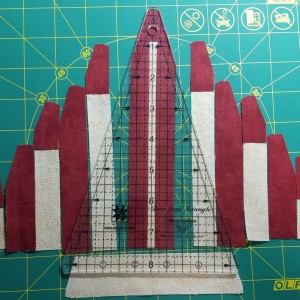 A lot of those little red pieces on the tops of the tan stripes look very similar to each other, and I was worried an ill-timed sneeze would make a mess of things, so whenever I wasn’t actively working with a piece, I tucked it into bed with the others, putting a ruler on top of the mat: 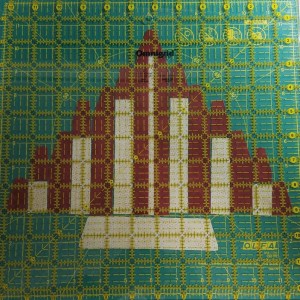 Here it is in the homestretch, and things were still lining up pretty well. What a relief! 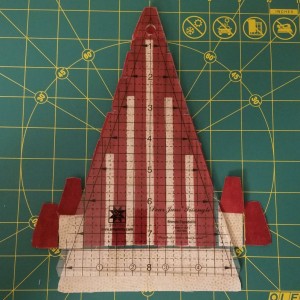 The striped part of the block ended up slightly wider than it was supposed to, but this is not at all surprising given the number of seams going from one side to the other. A few of those seams may have been off by a single thread width.

I completed my UFO Challenge goals for February, although it doesn’t seem like it matters if I’m on the right track with that, since it seems like nobody else in my retreat group is doing the challenge this year. Or maybe they’re just not crowing about their excellent progress. Or maybe they’re not getting around to crowing about their February progress until April, like me.

In February I finished one Dear Jane block, sewed two blocks together (L10 and L11, pictured here already attached to M10 and M11) ,and sewed 18 triangle motifs on the rainbow quilt: 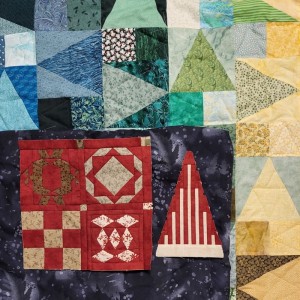 Now that I’ve stayed on the right track with the seams of this triangle block, I’m hoping to get back on track with the blogging – I have so much progress yet to share!