This is just a quick post to talk about my recent progress on adding sashing to blocks and sewing them together.

In March, I sashed blocks M12 and M13, down in the bottom right corner. M12 was one of the first blocks I did, and when I pulled it out to add sashing, I realized that I hadn’t ever marked the seam allowances around the edges of the block.

Apparently it was so early in my Dear Jane journey that I didn’t really believe I’d ever get to the point where I sewed the blocks together? At any rate, I very belatedly marked stitching lines around the edges of the block (much more awkward once all the seams were sewn), added sashing, and stitched the two blocks together.

It was really down to the wire on the evening of March 31st – so close to my self-imposed deadline that I was thankful I didn’t have to put a piece of sashing on the right side of M13 (since it is at the right edge of the quilt).

In comparison, L12 and L13 in early April went together quite smoothly, if slowly, and were stitched to M12 and M13 shortly after. Then I stitched those four to the four blocks I’d assembled in January and February, making a tiny four block by two block quilt top. It’s exciting to see it coming together!

While the progress is exciting, it’s also a little worrying, given that I’ve only been completing one new block per month lately. If I keep on this pace, I’ll be done assembling all the blocks in the lower right corner (J10-M13) by August, and then what will I sew together next?

I’ve been doing the blocks in random order – whatever strikes my fancy that day – and so my completed blocks are scattered all over the quilt. I needed to be more organized about what blocks I was doing next, to ensure I would have something contiguous to sew together starting in September.

So, I spent some time with my trusty index cards, arranging and rearranging, to fill in some gaps over the next few months and be ready to sew together another section of the quilt this fall: 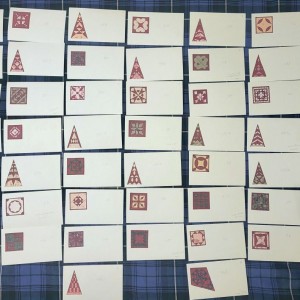 I think I’ve got a workable plan where my block construction can stay one step ahead of my block sashing and assembly. Even more exciting, I’m planning to do that center section of 25 blocks next.

Of course, it would be easier if I would just pick up the snail’s pace of block construction, but right now, this snail is going as fast as she can.