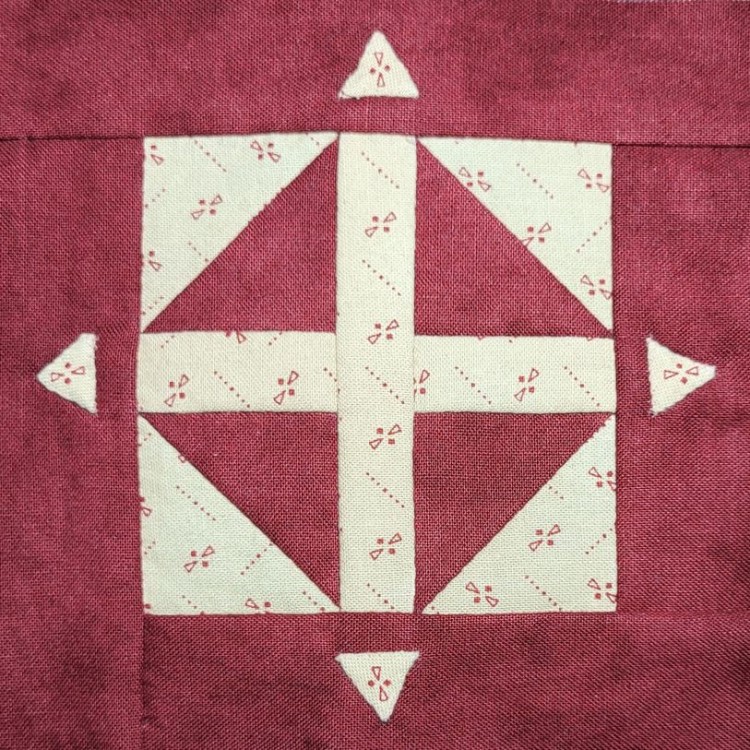 Since I finished the previous block on the second day of the month, I felt like I had a good shot to finish a second block in July.

Most of the block went really quickly, but those tiny appliqué triangles (I’ve been calling them soul patches, floating there in the middle of the border/chin like they are) were quite exasperating.

They started off pretty well – I was pleased with my fussy cutting. The triangles were so small, but luckily the motifs on the fabric were pretty small too. I cut the triangles so that there was a little helicopter motif in each one, pointing towards the edge of the block.

I felt like I had written a blog article a while back with techniques for dealing with super tiny pointy appliqué pieces. It may have been this one …  but whichever article it was, I obviously completely ignored it and just did my best to stuff all the seam allowance underneath these tiny triangles. The end result is not great, but I’d say they’re not any worse than the E6 squares I appliquéd though.

In between my first and second blocks of this month, I worked on the rainbow quilt. I’ve been making so much progress, working from the center outward, that I’ve actually reached the edge on the left side of the quilt. I own a half hoop, which is a semi-circle shape with a strip of fabric attached to the straight side of the semi-circle.

The theory behind these half hoops is that you pin the edge of the quilt to that strip of fabric, and then the semi-circle part of the hoop goes over the quilt, allowing you to quilt right up to the edge. In practice, I just couldn’t get it to work. There was too much excess batting and backing at the edge, and I couldn’t get it properly stuffed into the hoop.

Discouraged, I turned to the internet, and found this lovely YouTube video from Thimble Storm with a possible solution. The video never shows her face, but she has a tiny voice and short fingers like me, so it was weirdly like getting advice from myself.

The advice was solid though – basically, you temporarily baste a wide strip of fabric to the edge of your quilt, allowing you to extend the edge of the quilt out far enough that you can continue to use a regular hoop to hold everything in place and still stitch right up to the actual edge of your quilt. Here is my rainbow quilt with the strip attached, in a regular circular hoop: 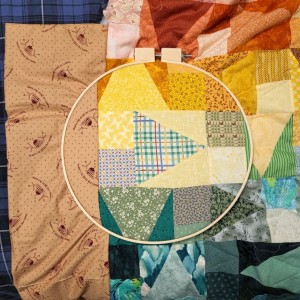 I made two of those strips out of some fabric I’d been given by my friend Cindy, which was too small for a backing but didn’t really lend itself to placement on the front of a quilt. Now I’m getting great use out of it – with two of these strips, I’ll even be able to quilt the corners! This is going to come in so handy when I finally start quilting the Dear Paulette quilt in 2032.

Armed with my new technique, I met (and even exceeded) my July goals for the UFO Challenge. I finished two (count them, two!) Dear Jane blocks, sashed and stitched two more to each other, plus completed a whopping 21 triangle motifs on the rainbow quilt: 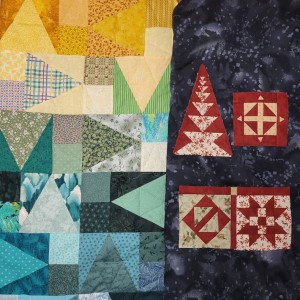 The win with the rainbow quilt this month helped offset the frustration with those tiny soul patches on this block. And finishing two Dear Jane blocks in a single month, for the first time in a long time, is like (warning, tortured analogy ahead!) a patch for my worn out quilting soul.