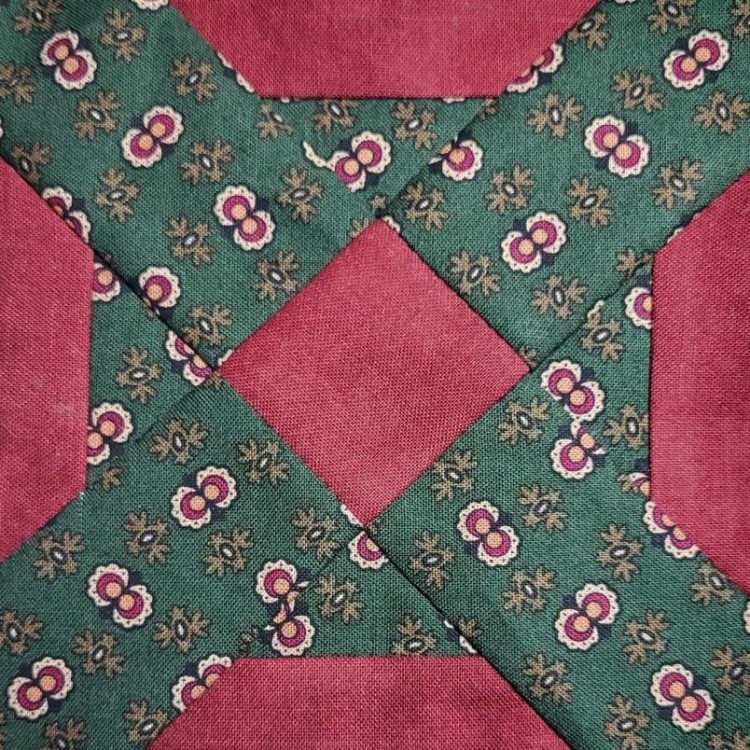 Since I want to sash together the 5×5 grid of blocks in the center of the quilt next, I’ve been focusing on completing those blocks lately. And I guess Jane wanted to show off the most difficult blocks by putting them front and center in her quilt, so it’s been all super complicated blocks the last few months.

There was the cloud debacle and the followup curved piecing block. Plus let’s not forget the tiny melons, tiny triangles, and tiny appliquéd squares. And I hadn’t even tackled the trickiest of center section blocks yet (the dreaded G6).

So, it was a real relief to toss in this very uncomplicated block before getting back to the real doozies.

This was the first block done during a virtual quilting retreat at the beginning of November. Yet another reason to pick an uncomplicated block – I like to pick a nice easy one for times when I’ll be quilting with an audience.

I also wanted something quick to cut out so I’d have handwork to do in the waiting room at the dentist’s office the following morning (another place where I often quilt with an audience): 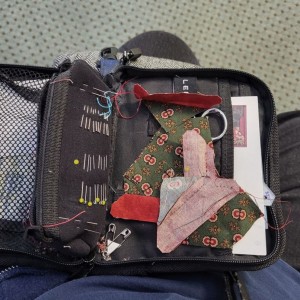 I switched to this fabric at the last minute – one I got from the Two Thimbles quilt shop in Bellingham. In hindsight, something with a (relatively) big print was maybe not a good choice for this block, where there were several adjacent pieces of the big print. Some of the motifs got chopped off at the seams.

I used this peekaboo method with the pattern piece in order to fussy cut the corner pieces: 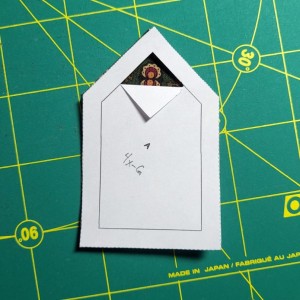 It worked really well for lining up the fabric so each corner piece had a motif in the point; unfortunately, it didn’t help me arrange it so that the motifs weren’t chopped off on the other sides of those corner pieces.

But at least they’re chopped off in a consistent way. I couldn’t come up with a decent fussy cut for the small triangles, so they’re both inconsistent and have lopped-off motifs. However, I’ve decided I’m not annoyed enough about it to redo the block in the same or a different fabric.

Here’s a little note for my fellow hand-piecers: I used a combo of rotary cutting instructions (small triangles and center square) and templates (corner pieces and side trapezoids) when cutting out this block. I don’t know if it was my lack of template tracing skill, but the center square ended up being noticeably smaller than the corner pieces, and they weren’t lining up properly. It wasn’t enough to warrant re-cutting the center square, but I did end up using the template piece for it to re-mark the stitching lines.

Despite these minor frustrations, it was a pretty uncomplicated block that I started cutting out one night and finished the next … just the quilting break I needed!